2009 seems much longer than 10 years ago. Barack Obama was elected President of the USA. The King of Pop Michael Jackson passed away suddenly. An Airbus A320 was forced to make an emergency landing in the Hudson River New York. The government expense scandal rocked UK politics, seeing many politicians resign. The Black Eyed Peas released “I got a feeling” spending 76 weeks in the charts. Box office smash Avatar was released grossing more than 2.7 billion dollars. Grafters Recruit Ltd was formed after a management buyout.

Since then Grafters Recruit Ltd have opened 4 new branches, developed Industrial and commercial divisions and increased our turnover by 150%.

Grafters Recruit Ltd formed in 2009 with 4 staff working from our head office in Hoddesdon. In 2010 we opened in Peterborough, followed by our Rugby branch in 2012. It was 2014 when we opened our Romford branch which was strategically moved to Basildon in 2018. In 2019 we opened our 5th office based in Cannock and Grafters Recruit Ltd now employs 24 consultants and administration staff throughout our branch network.

Throughout the last ten years we have concentrated on what we do best , providing HGV drivers throughout our branch network and at some remote locations however in recent years we have also started supplying clients with Industrial and Commercial staff with further success. Our On-site offering also provides our clients with a fully managed on-site solution.

We have also become “FTA Agency Excellence” certified. The scheme has been created for, and can provide benefits to, operators and driver agencies alike.  For operators, it can help to identify driver agencies who understand the logistics industry and the importance of an Operator Licence and those that are prepared to go that extra mile to demonstrate this.  For driver agencies, it demonstrates to employees and customers that they are an exemplar agency with regular auditing providing a continual review and improvement of their systems and staff development

We are immensely proud of the dedication and hard work that our employees and temporary workers show on a daily basis, this is no doubt the cornerstone of our success. Throughout 2020 we will continue to look at opportunities to open new branches whilst developing the Industrial and Commercial divisions within our offices.

Anyone looking to join the Grafters team within our branch network or in a new location please do not hesitate to email me at danny@graftersrecruit.co.uk. 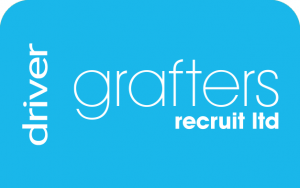 Grafters Recruit are in search of multiple HGV Drivers for our clientspecialises in large high end commercial removals in East London. You willbe working as

Grafters Recruit are looking for HGV2 Drivers for one of our client based inPurfleet. the company specialises in palletised services to their clientswithin a 15

Grafters Recruit are looking for a 7.5 ton Driver for one of our clientbased in Basildon. The company specialises in palletised services to theirclients within

Subscribe to our social media platforms to receive the latest news and vacancies from Grafters Recruit Ltd.

Join us and receive the latest vacancies and news from Grafters Recruit Ltd.